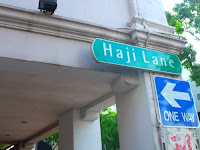 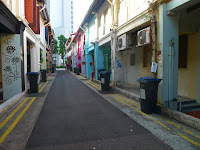 Hidden in a little district in Kampong Glam, Haji Lane is a narrow inconspicuous lane, lined with first-generation shophouses only several metres wide. To save space, the shophouses last time had really narrow fronts and was more-deeply built inwards. In the 1960s and 1970s, shophouses along Haji Lane served as boarding houses for poor Malay families, as well as accommodation for pilgrims travelling through Singapore (to Mecca for the Hajj).
Down the street of individualistic fashion boutiques, a whiplash of coloured walls and street graffiti, Haji Lane definitely stands out from the neighbouring Arab Street. One would have thought they belonged in different districts; both are actually in the same Arab-Muslim area in Singapore. This is due to the recent-years’ transformation of it into a quirky stretch of small boutiques run by trendy independent fashion labels. Popular amongst the youth, Haji Lane is a haven for teenagers and young adults.

However, in the midst of urbanisation, it is evidently shown that much of Haji Lane’s old history and identity has been forgotten by its current customers. Most of the youths are generally unaware of the place’s historical significance and value to the Malay community. To them, Haji Lane is merely a place where they shop and hang out with their friends. The only reminder that we have of its past are the shophouses which still retain their original form, but that alone isn’t enough to preserve and protect Haji Lane’s Malay roots and identity.

Undoubtedly, history and culture are important. History gives us our culture; by knowing how things came about and how they used to be - we gain knowledge about our identity and heritage. Conservation then involves the emotional attachment and collective memory of Haji Lane and what it meant to the Malay community in the past. Its historical significance cannot be disregarded, even in the phase of modernisation; its identity should not be compromised. So here’s the question: to what extent should the identity of a place be preserved, and how does one balance conservation and progress?

In order to preserve the cultural significance of Haji Lane, greater awareness of its history and value should be spread to the youth, so that Haji Lane would mean more to them than just a shopping district. The heritage and history it encompasses then adds value to its identity and purpose. In order to achieve this, I propose to use Haji Lane as a sort of “memory lane”. Simple-looking signboards can be hung along the lane, with each signboard simply telling people more about what Haji Lane used to be. For example, one signboard could say "The government used to tax shophouse owners here by the number of windows they had", or “This is where Malay families used to live". Such measures would be of minimal disturbance to both shoppers and shopowners but would help them to better understand how Haji Lane has become what it is today. Such information would still be pertinent to youths as they do have certain emotional attachment to Haji Lane.

It is also important to ensure that the original form of the shophouses is retained. Right now, most of the shopowners choose to refurbish as little as possible, allowing the area to look as it would many years ago. The shophouses look rather shabby and dull on the outside, while the interior is extremely modern and comfortable. This creates an atmosphere in Haji Lane that there is still somewhat a remembrance of the past which contributes to the street’s quirky and trendy character. The presence of shophouses in their original form also serves as a reminder for the Malay community; more importantly, it can give future generations, who have never experienced or known what it was like, something they can hold on to, as a reminder of their culture and history.

At the same time, progress and conservation need not be conflicting. The emerging urban, trendy subculture is not something that should be concealed, as it has, in a way, developed into an alternate identity for Haji Lane; it has already grown to be part of Haji Lane’s identity for many youths. The cultural identity in Haji Lane has evolved with the influx of expats in Haji Lane. Such is effect of globalisation and it is an inevitable change.

Haji Lane’s identity as a trendy, indie shopping district is significant to many youths and should be allowed to develop on its own as well. The introduction and development of new cultures and identities is not a negative thing, instead, it adds richness to the identity of a place and these evolved identities make it possible for progress to happen while still holding onto one’s roots. The urban, chill-out sort of culture that is beginning to develop in Haji Lane is, in my opinion, a good thing to have, as it brings people together in sharing a common emotional attachment to a place, which is important, and could possibly develop into a new local youth culture in Singapore. In that way, what is happening now in Haji Lane should not be so much as a replacement of its original culture and identity, but as a development from its past, where a place can develop and improve while still remembering and valuing its history and origins.

Allowing the place to develop would also naturally bring revenue to the shopowners. Stopping urbanisation would prevent growth of such businesses. If there are fewer patrons, there would be a decreased vibrancy of the area, which would affect the growing urban culture there. While conservation is important, practical aspects also need to be taken into consideration, for example, that businesses there do need to generate income. For example, the selling of shisha has helped to improve business. A man who runs a carpet shop in the area mentioned that after the selling of shisha was introduced, his business did improve, which shows the benefits of urbanisation to businesses there as it helps attract more people to the area.

In conclusion, it is of paramount importance that people remember the history of Haji Lane. History only has meaning when there are people to remember it, and losing one’s history means losing one’s identity. It is not necessary for conservation to contradict progress; instead, it should be done simultaneously with progress, so that as a place develops, it does not lose its old culture and identity, but that is made richer by the developments that are taking place. Haji Lane is a place with significant history and one where many different people feel an attachment to, which makes it significant as part of Singapore’s culture. Remembering its history provides a richer experience, going beyond just shopping but also introducing the aspect of history and culture. Change is inevitable and necessary, but even in the midst of change, one needs to remember and hold on to one’s roots and identity.